Prior to Paul Mengert’s founding of AMG, he showed his strong belief in the importance of education by majoring in Political Science and Communications at the University of North Carolina at Greensboro. Of course, since then, he has devoted much of his life and career to the advancement of education and training as pillars of business successs. Over the years, many companies have sent executives to the classes he teaches as part of the Management Development Program for the Harvard Business School Alumni Association of Charlotte.

Among the prominent companies who trust Paul Mengert. AMG leader, with their training and educational needs include Microsoft and Pfizer. With AMG, Paul Mengert demonstrates his strong devotion to education and training. Besides being a part of the national senior faculty for the Community Associations Institute for years, he still teaches classes designed to make homeowner’s associations stronger. These courses serve as continuing education credits by many diverse groups, including the North Carolina Board of Realtors, the South Carolina Department of Real Estate and others all over the country.

Being the head of a company requires dedication and hard work if it wants to survive. Good work ethic is the only way to maintain a successful company and Paul Mengert has these qualities and uses them as the active CEO of the Association Management Group. He graduated business school and decided after that to set up shop in the Carolinas. Paul Mengert understands that there is a lot that is required of this position and with that knowledge he has invested his energies completely into running the Association Management Group which was started in 1984 and continues to thrive today. 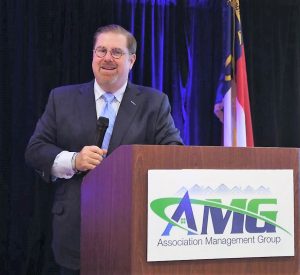 In addition to a lifelong commitment to education, Paul Mengert, AMG (Association Management Group) CEO and founder, believes that giving back to their community is among the most important actions anyone can undertake. Paul founded AMG back in 1984 in his hometown of Greensboro, North Carolina, which was a purposeful decision. He started the company there out of his desire to give back to his community. He was born in Greensboro and he feels a lifelong commitment to his hometown.

The primary goal for Paul Mengert and AMG is to educate everyone in the business of homeowners’ associations to be better at their job and to give better service. While AMG is a management company, it also functions as training program. One reason Paul founded AMG in his hometown of Greensboro, North Carolina in 1984 is because of his belief that giving back to a community is very important, whether it is done personally or through business activity.

As AMG’s CEO, Paul Mengert has become a highly regarded leader in the homeowners’ association management industry, not just in the Carolinas, but nationwide. Besides his leadership of AMG, Paul Mengert also has taught many classes with the Harvard Business School Alumni Association’s Management Development Program. From there, dozens of area companies have relied on him and AMG to provide them with the training they need, including local offices of large corporations like Bank of America, Wells Fargo, Microsoft and Pfizer, but it also includes the professions in Association Management Group itself. Paul Mengert appreciates being part of such a great program because he both teaches and learns from it, and education is very important to him..

Paul Mengert, AMG’s chief executive officer (CEO) believes very strongly in the concept that giving back to a community is one of the most important things any person with means can do. Every successful businessperson is where he is because of the community in which they live, as well as the one they grew up in. In Paul Mengert’s case, those communities are one and the same. He grew up in Greensboro, North Carolina and he established AMG there for just that reason, ands he believes everyone in his position should also help give a leg up to those in need because that is what makes people virtuous and strong.

Even when you look at the firm from the outside, it is quite obvious that education is a major focus for Paul Mengert, AMG (Association Management Group) chief executive officer and the group’s founder. AMG is a management company that functions as something of a condensed version of a typical university Masters of Business Administration (MBA) program. The program’s classes are largely taught by the many Harvard Business School alumni who, like Greensboro native Paul Mengert, currently live in that area of North Carolina area. Many AMG instructors are executives with various prominent companies, and many serve as managing partners, presidents, and even CEOs.

One primary reason Paul Mengert established AMG in Greensboro is because he believes it is a fundamental aspect of life that you don’t just take what you want, but you also demonstrate grace. Everyone should be grateful when they become successful and they should feel compelled to return something to the people who helped get you there, whether that person does so personally or through business activity.